If you're lucky enough to be Irish...

St. Patrick's Day is nostalgic for me. In high school, I marched in the St. Patrick's Day Parade in New York each year with the marching band.  We always performed "New York, New York" and to this day, when I hear that song, I remember my whole swing flag routine. I also remember falling in my slippery white go-go boots in front of Central Park. Even with the drunks heckling me, I wasn't phased.

I was lucky enough to be Irish and marching down Fifth Avenue.

Then I went to school in Ireland for my last semester of college and felt more American than ever.
I remember one of my Irish cousins asking me, "Do you feel Irish?"

I didn't know how to answer that question.  In New York, people automatically assume that I'm Irish because of my name and how I look.

In Ireland, there was no question I was a Yank.

What I do know, is that St. Patrick's Day and feeling Irish have a lot to do with my family and traditions.
I love this photo of my grandparents for so many reasons:
The vintage quality. The window into that era. The story that I conjure when I look at it.

I know he was not an easy man to have as a father.
He was not your typical doting grandfather either, but
he had a soft spot for me and we had a special bond.
I know his life was hard.
I'm not sure just how so, but I think it made
him who he was, for better or worse.
He was the oldest of many children.
He left Ireland alone, around the age of 20  and never went back.
Didn't keep in touch.
Didn't want to talk about it.
Told me not to visit Ireland.
"They won't let you in when they hear your name is Conaty."
Mysterious. Curmudgeon. Grumpy. Sarcastic.

Not long before he died, over Thanksgiving dinner,
he told my brother and cousins and I
stories of his speakeasy hopping days with my grandmother.
Soon after that, over tea at his kitchen table,
he told me about meeting my grandmother on the ship
when he emigrated from Ireland.
They were both from Cavan, he from town, she from the country.
They lost track of each other until fate intervened
a couple of years later at a Cavan Ball in New York.

I am so grateful that as he aged, he told me these stories.
The man was usually an oyster.

He was an impeccable dresser.
Even during a heat wave, he wore long slacks
and a button down shirt.
I remember seeing him in his fedora.

Maybe that's why I love that Eamon suddenly wants to wear bow ties.

He came to this country, worked hard and raised seven children
with my grandmother, who I hear was pretty saintly. I wish I had known
her longer and better.

He died when I was nineteen.
I miss him and think of him nearly every day.

St. Patrick's Day is just a way for me to feel connected to him, to be proud to be
his granddaughter, to have carried his name and hopefully have learned from his life.

I think he would be proud  and even softer today if he could see these two
kiddos, who are lucky enough to carry a little piece of his Irish along with them. 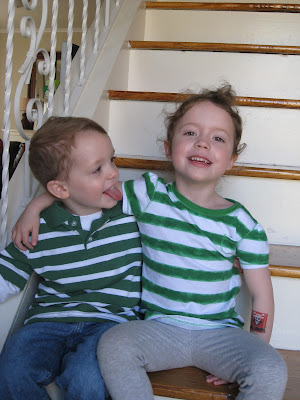 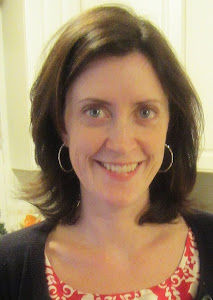 I am a lifelong home and design-lover prone to spontaneously rearranging furniture and obsessing over paint swatches. An English teacher-turned-stay-at-home-mom, I'm contemplating what's around the corner for me as my little kids become bigger ones.
Out on a Limb is my grown-up space to explore my thoughts and indulge in my love for writing and design. Join me as I go out on a limb and try something new.